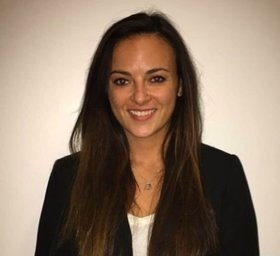 As TruView’s Director of Human Resources, Jacqueline Petrow plays a key role on the TruView Executive Team. As HR Director, Jackie administers to the company’s HR practices in all its facets, working directly with TruView President Nick Auletta in strategic hiring, developing HR policies, personnel development and compensation, and more.

After graduating from the State University of New York at Oswego with a Bachelor of Science degree in Finance and having completed internships in the areas of finance and payroll, Jackie heeded the advice of a college mentor who guided her toward the field of human resources. In the HR field, Jackie found a passion. She joined TruView in 2017 as a Human Resources Coordinator. Over the last five years, Jackie has excelled in successive positions, and now leads the TruView HR Team.

Jackie has played a central role in the expansion of the company—more than tripling staff to keep pace with TruView’s growing contract services—and in helping to make TruView a company where employees want to be part of a great organization with a big future. It’s a big job. Jackie maintains recruiting networks, interviews and recommends candidates, oversees regulatory compliance, manages payroll, designs employee compensation and benefits structures, implements training and professional development programs, and more.

For a company in growth mode, Jackie’s blend of HR and finance backgrounds, along with her readiness to help where needed, has been a real benefit—such as acting as interim project manager for a complex, state agency contract with a large contract labor force. Being goal-oriented and self-driven has been a big part of her success. “I always feel like I’m competing against myself, and that drives me,” she says. “I find satisfaction in getting the job done, no matter how complex it may be.”

Jackie places a high value on TruView’s company culture. “I have friends that I graduated with who went to work for larger firms, and they have gotten lost in the mix there. You’re seen a lot more in an entrepreneurial business.” The entrepreneurial business culture, Jackie contends, can allow for more immediate validation and growth. “What you do matters and has an effect on every other facet of the company. It’s more personal. Everyone knows everyone else here, so there’s a more collaborative, team-based approach.”

After five years of recruiting, screening, interviewing, and placing candidates, Jackie says that her intuition about an applicant lets her know whether or not the person will fit the culture at TruView. “It’s not just about their qualifications—they have to have that same entrepreneurial spirit as the firm in order to be successful here.” Jackie adds that she uses previous placements that have advanced their careers at TruView as examples to follow when evaluating new talent. “During the interview process I look for candidates with similar traits and attributes possessed by successful individuals already employed here.”

In her time as Director of Human Resources, Jackie cites COVID-19 as the biggest change to the HR landscape. “The pandemic was a game changer,” she says. “Businesses closing their brick and mortar locations in favor of remote work brought some big challenges.” From interviews being virtual to balancing the different HR regulations across state lines to technology concerns, the challenges were numerous, forcing executives to become flexible and adapt to the “new normal.” As Jackie puts it, with a smile, “Your share screen doesn’t buffer when you’re sitting in an in-person meeting.”

Always looking ahead to the next challenge or innovation, Jackie has several priorities with regards to her division. She and her Team are always looking to refine and enhance HR processes and compliance initiatives. As always, her priority in hiring is to ensure that selected candidates not only excel in experience and skillsets but also match and enhance the company culture as the firm continues to grow.